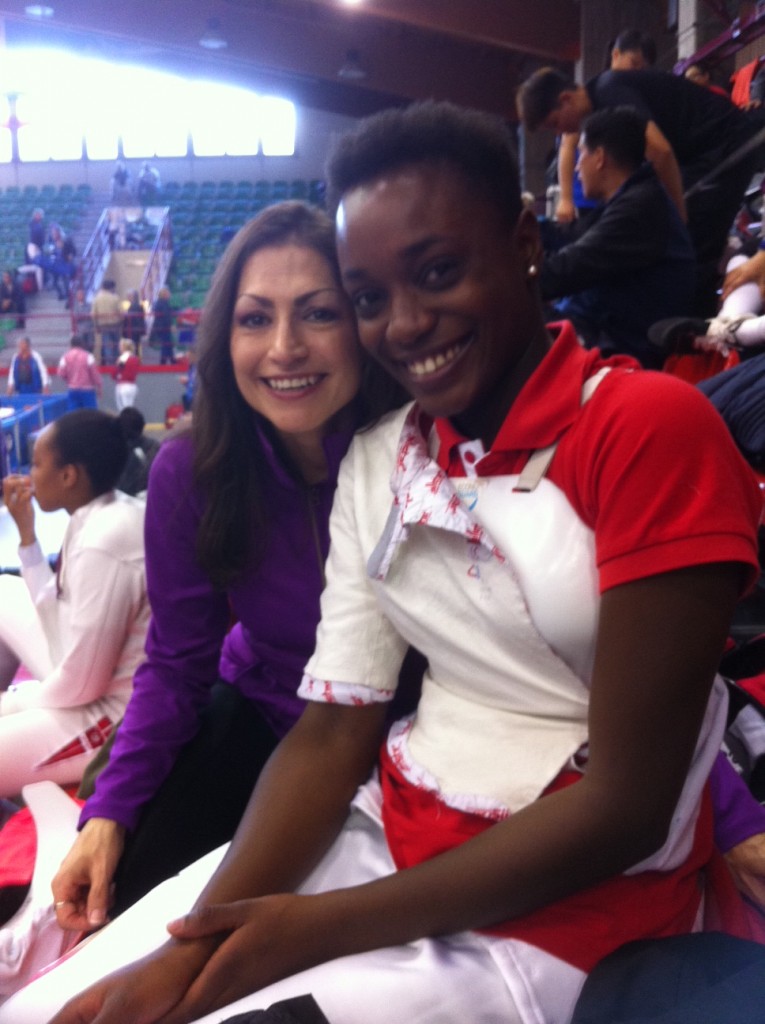 While attending the Epee Women’s World Cup in Legnano, Italy I was fortunate enough to meet fencing athlete Arsenelle Babela. Making my way down a very crowded hall toward the tournament arena after finishing a warm cup of tea, I almost ran headlong into Arsenelle and her second Mom. Her second Mom (the Mother of one of her team mates who had become very close with Arsenelle as well) was trying to support Arsenelle’s weight while also carrying her equipment bag. Seeing Arsenelle wince in pain and tears stream down her face, I asked if I could help. The second Mom (whose name I didn’t get) handed me her equipment bag and as easily as lifting a sack of potatoes, tossed Arsenelle onto her back and carried her down the hallway. I quickly followed as we all searched for the athlete’s infirmary. We arrived to find the door closed and locked. Unsure of when it would open, who was working there, if we were allowed to use it or if it was only for the use of each team’s medical care provider, the second Mom slid Arsenelle off of her back and helped her lean up against the wall Arsenelle was still crying from the severe pain she was experiencing and I genuinely felt bad for her. I asked her what had happened. Through a steady stream of tears, she explained that she was competing in her final match when she had landed wrong and felt her foot twist one way and her knee buckle in the opposite direction, followed by an intense surge of pain through her body. She further explained she could not put any pressure on that particular foot without excruciating pain shooting up her leg.

I asked her if she would let me look at her injury and she shook her head yes. We gently sat her on the floor and I proceeded to examine her leg, ankle, and foot. When she attempted to take her sock off, the pain was so severe she began to tremble. I instructed her to stop and to leave it on for the moment and then continued to examine her entire leg. Once I determined the severity of her injury, I understood her pain. Her muscles were extremely upset and screaming for help.

I had asked another fencer to please get some ice for Arsenelle and they returned with a white-haired woman carrying an injury kit. She took a can of spray ice/coolant from her kit and sprayed Arsenelle’s ankle down. Then she took out an ice pack, punched it vigorously (I don’t ever want to upset her), and placed it on Arsenelle’s ankle with some type of webbing wrap. As quickly as she had appeared, she was gone.

I needed to work on Arsenelle’s ankle to pull out the enormous pain she was still in and I knew she wasn’t going to understand what was happening to her. So as is my way, I made a joke to her second Mom about how amazed I was that she had just thrown Aresenelle’s equipment bag at me and then immediately picked Arsenelle up onto her back. Her second Mom didn’t quite understand me (because she doesn’t speak English), but laughed when Arsenelle translated for her. Her second Mom then continued my line of humor, saying that she has a powerful back because she has a powerful butt. We all laughed and then I turned to the young injured athlete and gently explained that in order for me to work on her injury, she was going to feel some discomfort and needed to keep a steady breath and grab onto her second Mom’s hand.

Once she reached out to her second Mom for support, I began my work on Arsenelle’s ankle and foot with a combination of Tui Na and Qi Gong. I paused to give her a moment of rest and asked her to move her toes. She slowly followed my instructions and winced in pain.

As I continued to use the same procedure on her again, she looked at me curiously and suddenly, her tears stopped. Knowing the full extent of her injury, I explained to her I needed to do more work on her and being on the floor in a busy hallway wasn’t the best place to do it.

Arsenelle told me there was a table in the next gym we could use. We all helped her up, and once again her second Mom lifted her up onto her back, walked down the hall, into the arena and climbed the stairs all the way up to the table we were going to use. Feeling a bit better, Arsenelle was about to put pressure on her foot to climb onto the table herself until I quickly snapped “don’t do that yet.” Reaching out to her, we all assisted her onto the table.

She lay down and I used the techniques I had learned in Qi Gong to assess once again what needed to be done to best help her. I then worked on her using Tui Na techniques, finding every place within her injury that needed healing help. A few times, she winced in pain and tears flowed again and each time, we paused and I led her through breathing techniques to calm her down. Once she caught the hang of the breathing techniques, I would continue the process. During the healing, she was so surprised each time I found a spot on her that was in pain that was neither her foot nor ankle. She thought it was only her foot and ankle but as I worked on her, she discovered what I knew… that there was more to her injury.

Continuing my work, I intermittently checked in with her to assess pain levels. She was pleasantly surprised as the pain decreased and her body started feeling better. She looked up, smiled at me, and asked “How did you know that there were other places in my body that were hurt? I thought it was only my ankle”. I explained I understand the body very well and injuries can be more complex than we initially think they are. It is easily assumed that taking a direct hit to the body in one area would cause an injury only to that area, but that isn’t always the case.

She let me know she was feeling much better and sat up. I instructed her to rest and not to put any weight on her foot for a while. She repeated that she was feeling better and told me that if she qualified, she wanted to compete in the next round of matches. I took a deep breath and told her “No, we just fixed it and the healing needs time to settle in.” She said she wouldn’t know if she made it into the next rounds for another 2 hours and that she would stay off of it during those hours. I explained to her that if she hurt herself in the next match we would have to do that same treatment all over again.

She looked at me with the sweetest face and told me that she really wanted to compete. I sighed and shook my head but I understood. I’ve competed in sports as well and know what it’s like to not want to give up even though the odds are against you.

I explained that she had to stay off of that foot and not put any pressure on it for at least an hour, and that I would check her after that and assess what needed to be done. I told her more than likely we would have to wrap her leg in order for her to compete. She happily agreed, telling me she would follow all of my instruction.

We set her in a place she could rest and then I went outside to breathe and enjoy a moment of the beautiful day. After some time passed, she came and found me (with the help of a friend she was leaning on) and let me know she did qualify to compete in the next round, she felt much better, and she really wanted to compete. After another assessment I could see that her injury was better but in order for her to compete her leg would need to be wrapped. She agreed to me wrapping it and went back to the place she had been resting. Her second Mom found me and let me know she was waiting for me.

Using Qi Gong to assess the points of pain that were in her leg, I wrapped it where I felt it was necessary. She was a bit surprised at the technique I used as it was different than what she had seen other people do but when she stood up on her own and put weight on her foot her eyes popped open. She looked at me and said “Wow!” I asked her how she felt and she said “There is no pain!”

Once again I warned her to be gentle on it and careful not to re-injure herself. She happily smiled and nodded. We took the photo you see attached to this article and I watched her walk off with one of her team mates back into battle and all smiles.

Bravo Arsenelle Babela for your courage!

For all athletes, competitors, and people who deal with pain, I hope this story encourages you to learn more about Qi Gong and the science behind this 3,000 year old art of understanding the human body. Only by understanding and opening our minds will we learn, grow, and improve.